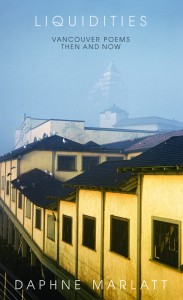 A Lansdowne Lecture by Daphne Marlatt

Sponsored by the Faculty of Humanities

In the opening event to WordsThaw 2014, Vancouver writer Daphne Marlatt celebrates the fluid relationship between language and place—in particular, Vancouver—and how they stream into and out of one another, both of them accruing allusive sediments.

“The protagonist in little theatres is most often language itself. And it has little time to act…” – Erín Moure

This is what Daphne Marlatt has to say about her upcoming Lansdowne Lecture:

“To live, write, engage in a city of constant change is to become acutely aware of flux and impermanence. To pass a yawning excavation site that only a week ago was a series of buildings one can no longer recall is to recognize the shifting ground of memory. When the physical body of a city one inhabits is constantly revised, its familiar parts and faces lifted, what has it become?

It prompts the writer in me to spend hours in city archives reading earlier residents’ accounts, poring over photographs of what was.  Only to realize how various classes and immigrant communities in the city’s history formed their neighbourhoods and then moved on, passing scenes in an ongoing theatre of city life. Yet surrounding mountains, inlet with its “false creek,” river and delta, these remain, if superficially altered, the terrain on which these urban developments have been staged. Once the movers and shapers have made their exits, what kind of theatre remains?  what shape does this theatre take in performance on the page?”

Daphne Marlatt, a longtime Vancouver resident, has tracked its state of near-constant flux in diverse genres, including poetry, fiction, creative nonfiction, and libretto. In Liquid (i) city, she will explore these and other questions that spark her longstanding fascination with Vancouver.

Read a review by Tanis MacDonald of Marlatt’s Liquidities: Vancouver Poems, Then and Now in the Autumn 2013 issue of The Malahat Review.